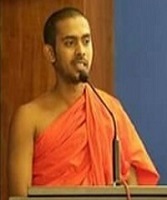 Doubt is interpreted as a way of knowing or reasoning doubt in the philosophy, and it is a basic symptom that causes different kinds of mental illnesses such as anxiety, stress, and depression in psychology. According to DSM, the reason for doubt has been discussed under the disorders or obsessive-compulsive disorders. Those disorders have been named as (OCD) Obsessive-Compulsive Disorders. Vicikicchā is the term used in Pāli Cannon to express the meaning of doubt in Buddhism. The major objective of this research study is to introduce some therapeutic methodologies to overcome it because it has been pointed out as a mental illness by the Buddha himself in a large number of discourses. The data from the primary and secondary sources related to the field are collected through the libraries and discussed with scholars in the field. The data analysis method of the research is descriptive method. According to the evidence of both Buddhism and modern psychology, the doubt is considered a mental illness. Psychiatric methods are used to cure this disease in psychology, but the Buddha has recommended a variety of mental therapeutic methods. Buddhist psychology extends far beyond modern psychology because modern psychologists still have not accepted doubt as a mental disease but just as a basic symptom that causes many mental illnesses. Doubt can be completely eliminated by using Buddhist psychiatry. Buddha has pointed out listening to the preaching (Dhammassavana) wise attention (Yonisomanasikāra), The Four Noble Truths, and Patticcasamuppāda, the theory of ‘dependent origination’ or the principle of causality and other methods. According to Buddhism, it is concluded that doubt is a serious mental disease and that it can be fully eliminated by using the above-mentioned methods. If anybody practices these methods she/he will succeed in this life as well as after death.