THE BROADCAST MEDIA AND THE PROMOTION OF INDIGENOUS LANGUAGE IN NIGERIA: THE CASE OF THE KANURI SERVICE OF BRTV MAIDUGURI IN KHADDAMARI, JERE LOCAL GOVERNMENT AREA OF BORNO STATE

Home » Creative » THE BROADCAST MEDIA AND THE PROMOTION OF INDIGENOUS LANGUAGE IN NIGERIA: THE CASE OF THE KANURI SERVICE OF BRTV MAIDUGURI IN KHADDAMARI, JERE LOCAL GOVERNMENT AREA OF BORNO STATE

THE BROADCAST MEDIA AND THE PROMOTION OF INDIGENOUS LANGUAGE IN NIGERIA: THE CASE OF THE KANURI SERVICE OF BRTV MAIDUGURI IN KHADDAMARI, JERE LOCAL GOVERNMENT AREA OF BORNO STATE 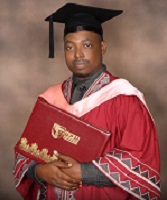 The importance of radio in the promotion of indigenous cultures cannot be underestimated. Ever since its introduction in the geographical area called Nigeria in the 1930s as Radio Diffusion Service (RDS) by the British colonial masters to its dynamic transformation in the 21st Century, radio broadcast service has been used widely and immensely in the promotion and preservation of indigenous cultural heritages among the various peoples of this country. Local or indigenous languages are one of the critical cultural phenomena that the radio broadcast services have been applied to and acknowledged to have positively contributed toward its enhancement and preservation, especially among rural and semi-urban communities. Since its establishment as a provincial broadcasting station in 1957 for relaying programs from the defunct Nigerian Broadcasting Corporation (NBC) Kaduna and Lagos in 1957, the radio service of Borno Radio Television (BRTV) Maiduguri has been broadcasting news and programs in Kanuri language, which is the languages spoken by the majority people in the state. This study focused on assessing the impacts of the Kanuri language service of the BRTV Radio among the audience in Khaddamari town, the headquarters of Jere Local Government Area situated about two dozen of kilometers from the center of Maiduguri city. This study aimed to document the impacts of the Kanuri broadcast service of BRTV Radio in the promotion and preservation of Kanuri language among the people living in Khaddamari town. Using the snowball sampling technique, 14 participants were recruited for in-depth interviews (two from BRTV Radio and 12 from Khaddamari town). The study revealed that (i) Kanuri program account for 90% of the programs in BRTV Maiduguri; (ii) people of Khaddamari community enjoyed listening to Kanuri programs like Salamma, Kanem Gai, Liwuram and the news broadcast in Kanuri; and (iii) some of the listeners were dissatisfied with several of the programs/news of BRTV. The study concluded that BRTV Radio’s contribution toward the promotion of Kanuri language in Khaddamari town is crucial but was minimal, often hampered by the dwindling broadcast power and reach of BRTV Radio signals. Therefore, the study recommended among others that BRTV should liaise with experts in the Department of Language and Linguistics at the University of Maiduguri or College of Legal and Islamic Studies (BOCOLIS) Maiduguri so that upcoming generation can be trained in order to update their skills in Kanuri language. The management of BRTV should reduce the number of programs in Hausa to increase the broadcast hours of programs in Babur Brah, Marghi and others local language since Hausa only constitute 2% of the population of the state (without bias to Hausa’s status as a lingua franca among many people of the state) so that Kanuri programs should occupy a 50% of the broadcast air time and the remaining 50% should be shared among other key minor languages of the state and English, which is the official language in Nigeria.