DO WE NEED TO SPEAK LIKE A NATIVE SPEAKER OF ENGLISH?

Home » Creative » DO WE NEED TO SPEAK LIKE A NATIVE SPEAKER OF ENGLISH?

DO WE NEED TO SPEAK LIKE A NATIVE SPEAKER OF ENGLISH? 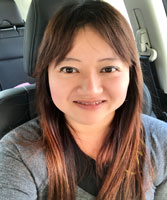 This innovation is an innovation of idea. Before this there is this perception that one needs to speak like a native speaker of English to be proficient. But this innovation claims that even though a Standard British English (Received Pronunciation) is advocated but an approximate pronunciation of the RP is also accepted as long as it is understandable. So learners of English are greatly encouraged to speak any English as long as they speak an English that is understandable (Abercombie, 1991 dan Jenkins 2000).

The English Language course is compulsory for all polytechnic students. To be able to speak in English well and effectively is a great challenge for most polytechnic students who are majority Malays with Bahasa Malaysia as their first language. This innovation encourages educators to teach phonetics in the classroom and their sounds association. This is so that the students can refer to the phonetic symbols and pronounced English words to the best they can, that could be understood by others. This innovation also makes teaching pronunciation easier for educators because they need not be able to speak like a native speaker to teach English pronunciation. This makes it more practical and doable for all educators who usually do not speak like a native to teach pronunciation.

In terms of implementation, students are encouraged to speak English in class even though not RP as long as they speak English. If they were to speak it with a Malaysian accent or slang it is acceptable as long as it is understandable. During the Oral test, students who pronounces not up to the standard of RP will be accepted as long as it is understandable. The concept here is communication and fluency not accuracy. Some of examples of the acceptable sounds are as in the table below:

The students’ role would be to speak any English as long as they speak and encourages their friends to do likewise. This will make them perceive pronunciation learning is doable, practical and realistic.

Students are taught phonetics and their sound associations so that they can pronounce English words properly and legibly. They can refer and learn via the phonetic symbols in the dictionary on hard copy or online. They could be further helped via the audio pronunciation provided. At the end of the day, as long as they speak an English that could be understood by others from Malaysia or all over the world, it is considered acceptable. This will then make them speak English more and via phonetics acquisition their pronunciation will greatly improve as shown by the results from the t-tests.